Cartoon characters hold a particular place in almost all of our childhood memories. Returning home tired from school and looking at our favorite cartoon probably used to be the best part of the day. When we think of being artistic and creative, this nostalgic genre should be the best to choose. Drawing funny cartoon characters will unknowingly put up a smile on our faces even though we have grown up and so much time has passed since then. When it comes to funny memories, we all know that most of the fat cartoon characters significantly contributed to it.

Watching cartoons was the best part of being a kid. We all have uncountable memories of various cartoon shows we loved the most. The most difficult aspect of adulthood is losing that pure and carefree version of ourselves somewhere long back. Sketching some of our favorite characters can bring a bit of peace to our hearts by allowing us to drown in the long-lost memoranda.

This cartoon character was one of the former reasons why our childhood was filled with purity and innocence. Pooh is an innocent and well-behaved bear who has yellow-colored fur. He is good-natured, and he loves to feed on honey. His friend circle consisted of Eeyore, a gloomy gray donkey, Piglet, a timid pig, Owl, Rabbit, and Kanga, who carried Roo in her pouch. Pooh’s simplicity and the selfless bond he shared with his friends make him one of a kind. No matter who watches this show, Pooh will draw some solace to their heart for sure. When it comes to sketching, Pooh is one of the easiest ones to draw. He is found wearing a red-colored t-shirt throughout the show.

SpongeBob SquarePants is among the most popular funny cartoon shows we loved watching as a kid. His best friend Patrick star is an obese starfish with olive-green eyes and a coral pink body with red dots and a red outline. He wears green-colored shorts with purple flowers on them. He is dumb, and that is what makes him so funny. Nobody can deny how hard we laugh when we see Patrick being himself. While sketching fat cartoon characters, Patrick Star serves as one of the most preferred choices.

We all need to admit that watching The Lion King still is one of the most preferred things we do on holiday. So, how can we forget Pumbaa, the deuteragonist of the show? Pumbaa, the gluttonous warthog, is one of the notable characters of the show. He is the closest friend of Timon and Simba. His character is shown as a loving, open-hearted character who is naïve and innocent. Most animals in the show are wary and dismissive of him because of his pungent odor, but that does not appear to bother his happy and straightforward personality.

Peter Griffin is one of the lead protagonists of the animated classic “Family Guy.” He is one among those amusing characters one would love to hate. He has an averagely bulky appearance. He is found wearing a white shirt with green pants throughout the show. He has brown hair, and he wears a black belt and a pair of brown shoes.

When it comes to fat cartoon characters, the one character that we cannot miss is Chris Griffin. In this show, he is the middle child of Peter and Lois Griffin in the animated TV series named “Family Guy.” Primarily, he has been shown as a shy and sweet guy. However, his character has been observed to turn more awkward and idiotic throughout the show. He is an averagely bulky guy wearing a blue shirt with grey pants during the show. He has yellowish hair, and his eyes are almost of a bulging appearance. He wears a pair of white shoes with red stripes on them.

Fred is the main character of the animated show named “The Flintstones.” It was one of the most popular shows of its time, mainly owing to its feature of a romanticized Stone Age Era. Fred can be described as a typical blue-collar worker. Since this is a Stone Age-themed show, Fred is seen wearing animal skin. He also wears a blue-collar tie over his specific animal-skin dress. He flaunts his black-colored hair and a smile throughout the show.

Homer Simpson is the protagonist and is one of the main characters among the other five in the show named “The Simpsons.” He is overweight and very lazy. His character always remained ignorant of the world around him. He has bulging eyes and yellow-colored skin like the other Simpsons. He is often observed wearing a white t-shirt and blue pants throughout the show.

We all should admit how we loved the “Courage the Cowardly Dog” series as a kid. Muriel Bagge is the deuteragonist of the very same show. She is the dynamic wife of Eustace Bagge and is the owner of Courage. She is a Scottish older woman who is sweet and kind by nature. She is seen wearing an orangish dress and a yellow apron on it with black boots. She has white-colored hair, and she also wears a pair of spectacles.

Eric Cartman comes under the four main characters of the famous TV series named “South Park.” His character has been portrayed as aggressive, savage, prejudiced, arrogant, and narcissistic. He possesses a bulky appearance and averagely large eyes. His character is portrayed, donning a red shirt with brown pants. He also wears a sea green shaded cap with a yellow bow on top.

Mrs. Poppy Puff has her name listed among the popular fat cartoon characters undoubtedly. She is one of the loved characters of the show SpongeBob SquarePants. She is the teacher of SpongeBob at school, where she teaches her students how to drive boats like underwater cars. Mrs. Poppy Puff is a pufferfish who wears a sailor uniform. She flaunts her golden hair, and she is known for her distinctive voice and temperamental personality.

Garfield is a fictional cat who plays the role of the protagonist of the comic strip, also named after his character. He is a cat who has a bulky appearance, and his character is shown primarily as a lazy one. He is a cynical orange Persian/Tabby cat. His character is remembered for his love for lasagna and sleeping all day. He is shown to hate exercising and Mondays. He also possesses severe hatred for a fellow cat named Nermal.

Chief Wiggum belongs to the most famous characters in the animated TV series named “The Simpsons.” He plays the role of the chief of police in the show’s setting of Springfield. However, he is an extremely lazy police officer. He is morbidly obese, straightforward, indecent, ignorant, and incompetent. He possesses an utter fondness for doughnuts and “Chintzy Pop,” which is a fictional popcorn. He has grey hair, and he wears an official police suit of bluish-grey shade.

If you want to sketch some cute and fat cartoon characters, Albert Jackson should top the list of your ideas. Fat Albert has been the primary protagonist of the show “Fat Albert and the Cosby Kids.” He is the one after whom the show has been named. The famous Junkyard Gang in the show refers to him as the heart and soul of it. This character is portrayed as exceptionally obese, but he is very active. He possesses an utter interest in playing sports. He is seen wearing a red pullover sweater with a white shirt and blue jeans, paired with white sneakers throughout the show. He is a civic-minded character who is shown to be wise beyond his years.

Cleveland Brown Jr., the son of Cleveland Brown and his late ex-wife Loretta is one of the main characters in the show named “Family Guy.” His most important character traits are his laziness, obesity, and his relatively low social intelligence. However, there are occasional references in the show which states that he was academically bright. He is a typically bulky guy with spectacles who has a bit darker shaded skin. You must have seen him wearing a red t-shirt and a pair of blue jeans throughout the show.

Also referred to as the Sea Witch in the famous show named “The Little Mermaid,” Ursula is the main antagonist. She is a villainous Cecelia, which means she is half-woman and half-octopus. She has a morbidly obese structure with light lavender skin and white-colored hair.

Fat Cat is the secondary antagonist in the famous show Chip ‘n Dale Rescue Rangers. He is a felonious gray Tabby Cat who plays the role of the crime boss in the animal world. He displays his catlike traits in the presence of humans but wears a purple business suit while with his other furries. He is also shown to possess a taste in costly things. He is always seen to be accompanied by four of his henchmen.

If you have been a die-hard fan of The Simpsons, Barney Gumble is bound to be one of your favorite fat cartoon characters. He is shown as a recurring character who is typically referred to as the Springfield town drunk. He is the best friend of Homer Simpson, though their friendship possibly lessened after high school. He is shown to work as a human guinea pig for medical research facilities. He was portrayed as a brilliant character, but his habit of drinking seemed to destroy everything. After he turned into a drunkard, he is just observed as a disgrace to his family.

Mr. Smee plays the role of the secondary antagonist in the famous animated feature film of Disney named “Peter Pan.” He is the loyal mate of Captain Hook. Smee is soft-spoken, genial, and he possesses a bumbling behavior. He is an ultimate kind-hearted character, due to which he often fails to succeed in criminal acts.

Comic Book Guy refers to Jeff Albertson, a recurring character in the animated TV series named “The Simpsons.” He is named such because of his profession as a stereotypical middle-aged comic book collector. He is a morbidly obese and geeky proprietor of the local comic book store of Springfield. He was primarily meant to be an antagonist. However, he is just shown to be sarcastic, moody, and insulting at specific points.

Krusty, the clown, is a cynical, burnt-out, addiction-riddled smoking clown host of the famous TV show named “The Krusty the Clown Show.” He is a recurring character in the animated TV Series called “The Simpsons.” His actual name is Sir Herschel Shmoikel Pinchas Yerucham Krustosky, formerly known as Rory B. Bellows. He is the host of Lisa and Maggie’s favorite TV show. Without his makeup, Krusty almost resembles Homer Simpson. He possesses a cow skull birthmark and averagely tiny feet. Krusty has aqua-green hair in three tufts on the sides and top of his head and a white face. He wears a light purple, short-sleeved shirt, and lime green clown pants. He complements his look with red clown shoes, a light blue bow-tie, and white gloves.

It does not depend on a kid, an adult, or an older person; cartoons will always remain special for you. Drawing simple and easy cartoon characters is the way for bringing peace to your heart while taking a stroll down memory lane. If you feel the mood for sketching some cute and fat cartoon characters, then you can be confused among the plethora of options available. However, taking a look at the characters mentioned above is bound to ease things up. So, what is stopping you from painting your imaginations? Pick up your brushes and colors and get started with your venture of drawing butyl cartoon characters! 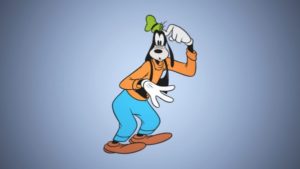 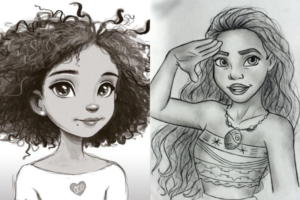